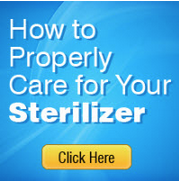 Every glove that can withstand 273f, can be sterilized in 40 minutes begining to end

Preparation for putting on surgical gloves

Gloves are cuffed to make it easier to put them on without contaminating them. When putting on sterile gloves, remember that the first glove should be picked up by the cuff only. The second glove should then be touched only by the other sterile glove.

Step 2
Open the inner glove wrapper, exposing the cuffed gloves with the palms up.

Step 3
Pick up the first glove by the cuff, touching only the inside portion of the cuff (the inside is the side that will be touching your skin when the glove is on).

Step 4
While holding the cuff in one hand, slip your other hand into the glove. (Pointing the fingers of the glove toward the floor will keep the fingers open.) Be careful not to touch anything, and hold the gloves above your waist level.

NOTE: If the first glove is not fitted correctly, wait to make any adjustment until the second glove is on. Then use the sterile fingers of one glove to adjust the sterile portion of the other glove.

Step 6
Put the second glove on the ungloved hand by maintaining a steady pull through the cuff.

Step 7
Adjust the glove fingers until the gloves fit comfortably.

As you remove the gloves, avoid allowing the outside surface of the gloves to come in contact with your skin, because the outer surface will have been contaminated with blood and other body fluids. Avoid letting the gloves snap, as this may cause contaminants to splash into your eyes or mouth or onto your skin or other people in the area.

Remove used gloves before touching anything: Countertops, faucets, and pens and pencils are frequently contaminated because health care workers touch them while wearing used gloves.

Step 1
Rinse gloved hands in a basin of decontamination solution to remove blood or other body fluids.

Step 2
Grasp one of the gloves near the cuff and pull it partway off. The glove will turn inside out. It is important to keep the first glove partially on your hand before removing the second glove to protect you from touching the outside surface of either glove with your bare hands.

Step 4
Pull off the two gloves at the same time, being careful to touch only the inside surfaces of the gloves with your bare hands.

Step 5
If the gloves are disposable or are not intact, dispose of them properly. If they are to be processed for reuse, place them in a container of decontamination solution. Wash hands immediately after gloves are removed, since gloves may contain tiny holes or tears that leave you at risk of exposure to contaminated blood and other fluids.